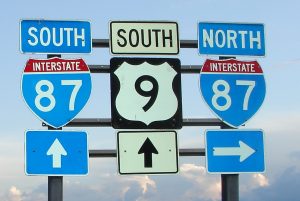 Can you go South on The Northway? It reminds me of those old puns about parking on the driveway and driving on the parkway.

The answer is YES! You can go South on The Northway!

I-87 is the main highway that runs from south of Albany NY through Saratoga Springs and up to the Canadian border. The Northway, as it is called, is a great way to quickly get around the Capital Region and the Saratoga area.

There are 3 exits for Saratoga Springs on the Northway.

Exit 13 North and South Sign on I87. Photo: Everyday Saratoga

When traveling around the areas south of downtown Saratoga, the exits at 13 are very helpful. Both exits at 13 take you to Route 9. North takes you towards downtown where South takes you towards Malta. Exit 13 N will take you right down Route 9, past the Saratoga State Park and becomes Broadway, the main street in downtown Saratoga. If you are on your way to Malta for any of the shops, restaurants or medical buildings, Exit 13 South is a great choice.

Exit 14 – Route 9P – Takes you Downtown – not during track season

Exit 14 on the Northway gets on and off onto Union Street. For a good point of reference, the Saratoga Raceway Track is on Union Street. Union is a great street to take you into downtown as it meets up with Circular Street by Congress Park. During Track Season, the 6 weeks of the summer when the Saratoga Raceway is in full swing, you should probably avoid using this exit / entrance to The Northway. I think Exit 14 is super useful for those coming and going to the races.

Exit 15 is great for coming and going to the Wilton area and mall. Construction workers have been working for a long time to expand the bridge that runs Route 50 over The Northway. It is a serious improvement in making it a better way to travel between Downtown Saratoga and all the stores, plazas, and restaurants of Wilton.

All 3 exits are very useful for getting around the Saratoga Springs area. Try the different exits to see where they bring you and what is around you.

Do you have any advice for people traveling around the Saratoga area? Which exits do you use the most? Are some more traveled than others? How is exit 14 during Track Season?

Thanks for reading! I hope it helps!  :o)