Pokemon Go at Saratoga Race Course, is really Pokemon No

Saratoga Track Season: the busy 6 weeks in July and August where the environment of Saratoga Springs changes into a hugely busy tourist town welcoming visitors from all over.

Track season is upon us. How does track season play into the Pokemon Go fun? The answer is, it really doesn’t. It is hard to find Pokemon inside the gates of the Saratoga Springs Race Course. You would think that Pokemon and Horses would go well together, but here they just don’t.

There are 3 Pokestops at the Saratoga Race Track:

This Pokestop can be reached from Union Street while walking or driving by. The large Saratoga Springs Race Track sign in the front of the track is a Pokestop. Since there are often kids in front of the gates selling waters during track season, this Pokestop is often Lured.

There are 2 stepping stones with flowers in the Saratoga Race Course Park. The one you want is near Gate A. If you walk through Gate A and continue towards the Grandstands there is a large vase of flowers on the right. The vase and the rock platform it sits on is a Pokestop. If you are coming from somewhere else in the park, the Pokestop is in front of the Grandstand, near the Time Warner Pavilion and near Gate A. 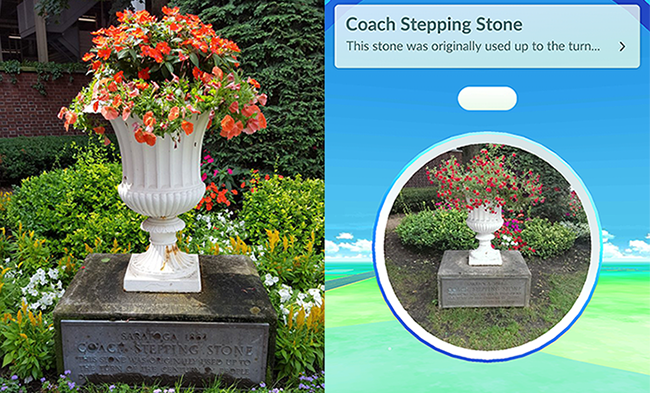 Another Pokestop at the Saratoga Springs Rack Course is the Big Red Spring. This spring is in the far corner of the backyard of the track behind the Paddock area. It is believed that taking a sip from the Big Red Spring will bring you good luck. I have found some tasty springs in Saratoga, this is NOT one of them. 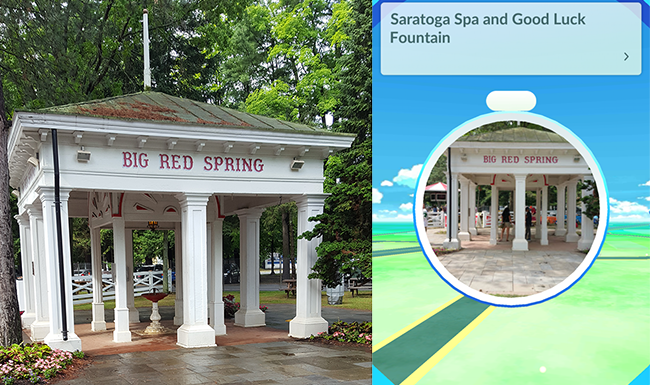 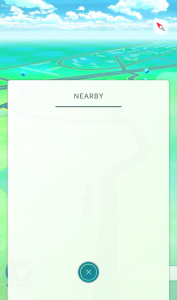 As for catching Pokemon, you can’t. When walking through the Race Course area, there are no moving leaves, no Pokemon popping up and the nearby list is nearly always completely blank.

The only time Pokemon appear (for me) at the Saratoga Race Course is when someone puts a Lure on one of the Pokestops. The Pokestops are Lured often and I have caught Poliwags and a Goldeen.

Let us know what Pokemon you have seen or caught in the Saratoga Race Course? Is your nearby blank? Can you only find Pokemon when there is a Lure set? Help all your fellow trainers by leaving us info in the comments!

Thank for reading! I hope this helps! :o)

One Response to Pokemon Go at Saratoga Springs Race Course