Renting a house in Saratoga Springs for our first winter here was very, uh, interesting.

We contacted the Saratoga Excelsior Group to come on out and fix problems, but they were not as helpful as they were when we started renting.

This is one thing I learned, Ice Dams are real. 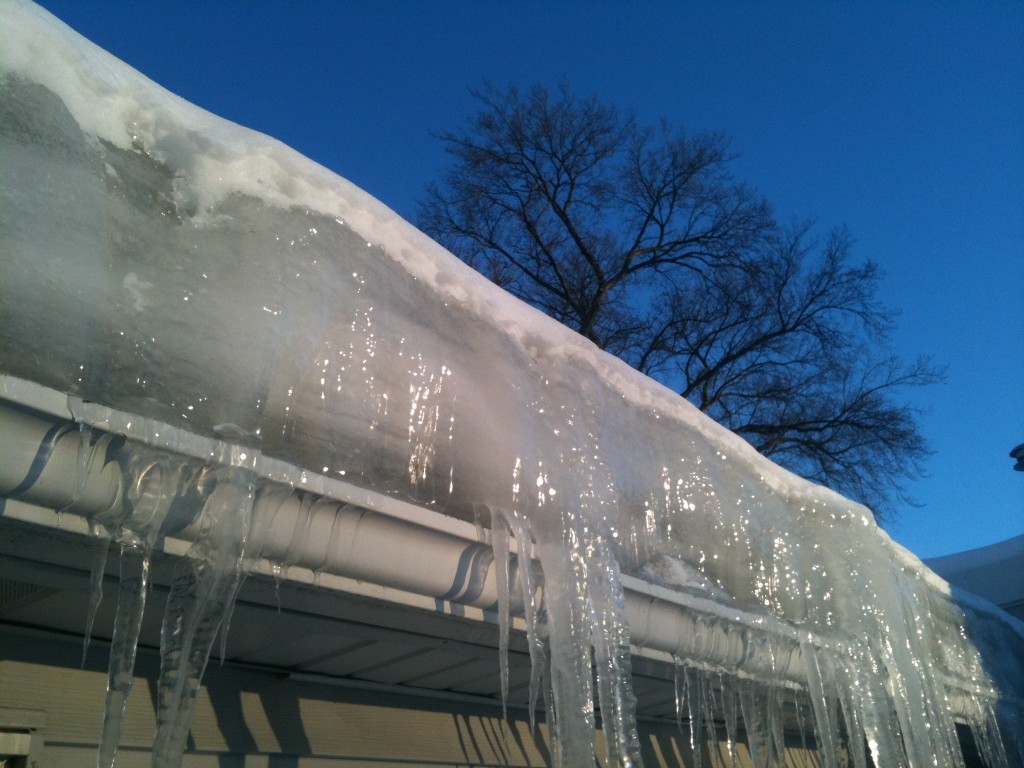 Something they don’t have in Rochester, ICE DAMS. Now, I have lived in Watertown and Rochester, my hubby grew up in Buffalo. We never had to deal with ice dams.

What is an ice dam? Good question.

I think it happens here because of the sunshine.

Rochester and Watertown winters are very gloomy. Cloudy, overcast, gray, gloom. The first thing I noticed about winter in Saratoga Springs is the SUNSHINE! I have to admit, as much as I HATE winter, the sun shining just about every day, with beautiful blue sky and some puffy white clouds, really made it more bearable.

That being said, I don’t know for sure, but I think the sunshine is what causes Ice Dams.

I found a wonderful diagram out on Google that really explains it well. 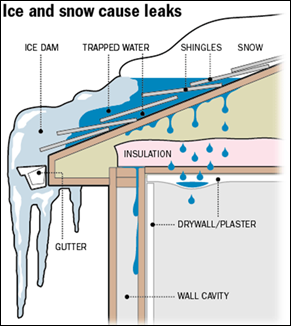 So there a pile of snow on the roof, the sun shines down heating up the shingles and melts the snow a bit. Warm air in the attic contributes to the melting, I’m sure. That melted snow runs down the roof and before it can run off, it FREEZES. This creates great big thick ice and icicles on the edge of the roof. As more snow melts, it gets trapped on the roof by the thick ice on the edge doing two things. Making the ice bigger and thicker and pushing back on the snow and water pushing it up under the shingles. Damn you, Ice Dams.

I would have designed roofs differently. How exactly, I don’t know.

So, now you have water being pushed under the shingles. Not good. That water seeps through the plywood under the shingles and drips into the attic. This diagram is perfect because that’s exactly what happened. Water bunched up behind the paint and bubbled the paint out. It was creepy looking.

Next thing I did what every other homeowner with a roof full of snow does, got out the roof rake. (I watched some videos on YouTube to figure out how to put it together and how to use it). A roof rake is a neat idea, but it’s really hard to use. The idea is that you have this snow shovel on the end of a long pole. You stand on the ground and you keep adding sections to the pole to make it longer until it reaches the roof. I’m sure they come in different qualities.

Drop the shovel on the roof and pull. Sounds easy, right? Heh.

I called the Saratoga Excelsior Group for help.

Workers came right out and shoveled off the roof and sprinkled ice melt on it. Problem solved! Nope, a week later it happened again. Problem temporarily fixed, yippee!

Until we got a bill for $750 for ice removal. They didn’t even give us a heads up that it wasn’t included in renting the house from them. Did they expect us to climb up onto a two story house roof and shovel off the snow, sledge hammer the ice on the edge and push it all off? Ice Dams. Not going to happen. No one could PAY ME to get up onto a snow and ice covered roof, especially if it’s not even my house.

I’m sorry to say that I don’t have any pictures of the ice dams, all the water damage and dining room flood. After we moved out of the rental I deleted them all out of anger. I never thought I would be sharing my story with you!

Have you had to deal with ice dams? What did you do? Do they have them where you come from? Please leave us notes in the comments.

Thanks for reading! I hope it helps!  :o)

I am Sharing my House with WHAT!?
Where to Park to Pick Up Your High School Kid at Saratoga Springs High