There are so many different types of pizza out there it’s hard to know what to expect when you are in an unfamiliar place.

There are the famous types of pizza, New York Pizza, Chicago Deep Dish Pizza, and even California Pizza. But I had no idea that in different areas of New York State, the pizza is different. 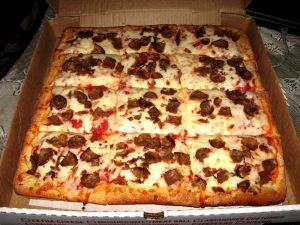 Pizza in the Finger Lakes region has thick crust and is cut into squares.

I have had many, many different styles of pizza over my lifetime. Growing up in the Finger Lakes area, Waterloo, NY to be exact, we ate thick crust pizza. The crust was over an inch thick, with tons of little air holes, and was crunchy, especially the bottom. It was topped with a thin layer of sauce and cheese and then whatever toppings you want. It was a rectangle shaped pizza, cut into square pieces. There were outside crust pieces and inside pieces with no crust.

When chain restaurant pizza became popular they all seemed to have a similar style which I would say was a traditional style pizza. Unless the chains tailor their styles to the region they are in (like Pizzaria Uno), I thought they served “normal” pizza. Chains like Pizza Hut, Domino’s, Little Caesars’ and Papa John’s have very similar sized pizzas. They have fairly thick chewy crust, substantial layer of sauce, decent amount of cheese, then toppings. Of course, Pizza Hut original pizza was a thick and greasy crust with tons of sauce. These chains give you a round pizza cut into triangle slices.

The Rochester, NY area has what I would call traditional pizza. Even the local pizza places match the chain restaurants.

Buffalo style pizza has a soft chewy crust, a solid layer of cheese and fresh toppings.

Then I experienced a new kind of pizza. I met my hubby who is from Buffalo, NY. I love Buffalo pizza. It has a thick, chewy crust, but it’s soft and can easily be torn off. It has a pretty good layer of sauce but the cheese is very different. Buffalo pizza has a solid layer of cheese on top. All the shredded cheese melts together to form a delicious solid layer of cheese. And the cheese itself in Buffalo just tastes different. Yummy.

All these different pizza places have pretty standardized sizes. Small is good for one person, medium could be split into 2 portions, large would easily feed three people, maybe 4 with nothing leftover and a sheet or party pizza is a big, rectangle of pizza cut into squares that could feed, well a party.

So, what is Saratoga Style pizza?? 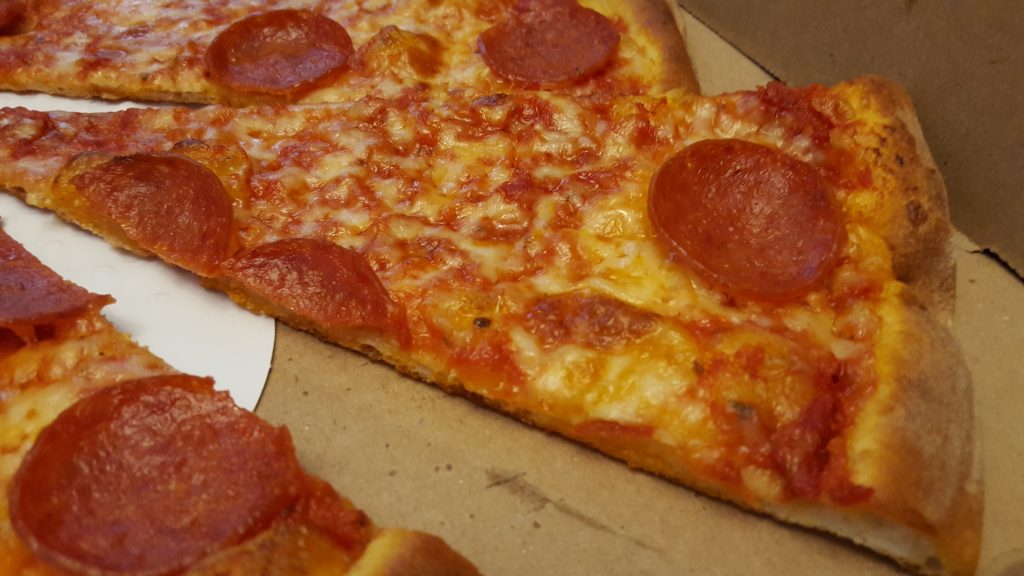 Saratoga Springs pizza is much like New York style with long, foldable slices.

Saratoga Pizza reminds me a lot of New York Style pizza. It’s a thin crust that bends when you pick up the long slices. It’s always round, cut into big triangles where the tip hangs off the edge of your paper plate. Many people fold the slice the long way to eat it and some people use two hands, one on the back crust and one under the middle of the slice.

There is definitely a difference across New York State when it comes to types of pizza. Saratoga Pizza may be shaped the same but the taste differs from place to place, be sure to try all of the local pizza places to find out which ones you like.

Are there other types of pizza in New York State that I missed? What are your favorite pizza places in Saratoga Springs? Let us know in the comments below!

8 Responses to What Type of Pizza is Saratoga Springs Pizza?